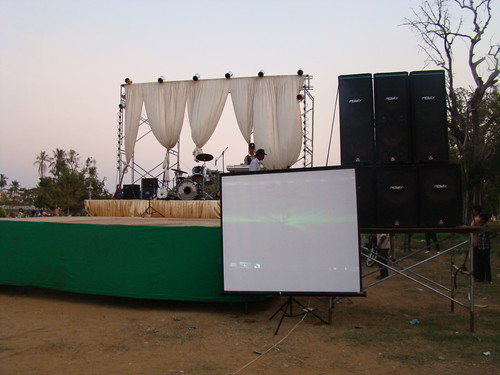 Since the Shine Human Rights Festival was held in Naga Springs park on the riverside of Battambang Town on December 10th, it appears that the location is gaining traction as a public celebration space for International days of recognition…. On February 14th, a collective of young Khmers from all over the province came together to put on a concert to commemorate Valentine’s Day and address social problems among their peers. Now, SALT organisation and Coconut Water Foundation will collaborate to hold a festival commemorating International Women’s Day next Monday, March 8th. They’ll be moving in hot on the heels of another locally organized concert which is being set up right now.

It’s great to see groups getting out there and conducting activities in a location with such great exposure. For a country in which so much work being done to address the problems of communities, it is surprisingly rare to actually hear about social projects here, as they have traditionally existed as weirdly well kept secrets between NGOs, donors and beneficiaries. Bringing these sorts of events into the public sphere breaks the mold of top-down, institutionalized engagement with social projects which I can only think is a step in the right direction.

Valentine’s Day is a recent addition to the Cambodian Calendar which has attracted some dark undertones; a recent study done on Khmer youth discovered that 66% of males planned to have intercourse with their partners on Valentine’s day, regardless of consent. This supports the observation of NGO workers that Valentine’s Day is a black spot in the year for incidence of gang rape and related violence.

Kinyei supported Youth Voices, a collective of 8 self-organized youth groups in Battambang Province, Cambodia, as they coordinated a hip-hop event on Valentine’s Day to raise awareness of this and other issues which Khmer youth face such as drug abuse and STDs. The event’s program was made up of performances from local rap, hip hop and break dance groups, a theatre performance as well as a singing competition, and attracted an estimated total audience of over 2000 young Khmers who were out for fun on Feb 14.

The groups comprising Youth Voices have been active since 2008. This was their first mass collaboration, and their largest project to date. Kinyei supported the group with a social media campaign, organizational and logistical support, and helped raise the event’s budget entirely using online social networking tools.

The event came off as a huge success, has spawned plans for future awareness raising concerts and generated valuable relationships among the widely distributed youth groups which are already generating some cool new projects. We’re really proud to have been able to help out.

YVBB thank you message to donors