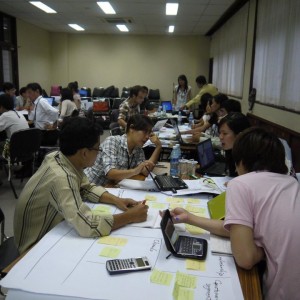 For some reason every event we go to seems to produce pictures of people sitting around which never represent the buzz and kick that I remember the event being all about, and the ARUN business idea comp that just went by is no exception. So I want to make it clear that despite the picture to the left being of people in chairs and tidy clothes, the 2-day competition / symposium was really awesome and I’m already excited for next year’s.

Kinyei went down as facilitators to help the 3-person teams (2 Cambodian and 1 Japanese student each) identify social issues, conceive of solutions, and try to distill an innovative, workable business idea from all of that. With just 24 hours to do this from start to finish, the teams performed admirably and I think they can all feel justifiably proud of their efforts.

Despite going along as “facilitators”, the experience was really a learning one for us too. Seeing groups of other people trying to find the right balance of social impact and economic feasibility (although I suspect that’s false dichotomy), and trying to home in on a social problem sufficiently well-defined to begin to tackle throws the whole process into a new clarity. Here are the top four things we learned from the event:

**Well-defined is half done ** “Hunger” might be something you’re really passionate about solving, but as a problem for a social enterprise to tackle, it is really pretty vague. Often groups had to sacrifice their heroic attack on a colossal social problem in order to find one that was clearly defined enough that a solution in the form of a single business was possible. Something we found helped in this process was an iterative interrogation of the causes of their stated problem: “What causes hunger here?” and “Ok and what causes that?” until an approachable problem emerged.

Know your customers This is an entrepreneurship truism, and only more important when your enterprise is “social”. Frequently teams found they were trying to address problems and work with customers from a completely different socio-economic or cultural space to their own, and were therefore flying blind when it came to predicting their customers’ values and priorities. You need to be in touch with your customer base early and often, testing your critical assumptions in the real world to avoid potentially finding out one of them is critically wrong many months and thousands of dollars down the line.

Be flexible – about (almost) everything In the competition, teams were coming up with ideas from scratch. The businesses had no customer bases, no buildings, no one on payroll and no existing brands to worry about. In other words, the teams had everything to gain from re-thinking their ideas from the ground up in response to new information, and nothing to lose – yet frequently, we found people reluctant to re-think their business model after it had been conceived. The problem is that any team that is diligently exploring a given social problem will inevitably come up with game-changing insights or information during the process, and often these insights will show their existing solution to be less than ideal. Teams therefore need to be able to prioritize their social mission, and be prepared to throw out any and all business ideas that they discover don’t serve that, rather than staying attached to a business idea itself, and manipulating the social mission and impacts to it.

Your team is your single most valuable asset Finally, what was clearly obvious in the final presentations was that the passion, motivation and resources of the individuals in a team can make all the difference to potential investors (or in our case, judges.) The greatest social business idea in the world is only as good as the team that is going to implement it.

You can find out more about the event from ARUN, and Sen Tharo did a write-up you should probably check out.

The nascent social entrepreneurship culture in Cambodia is really exciting and it’s going to be interesting to see what the ARUN students end up doing with their ideas now that this competition is over (students, write to us to let us know!). With two more similar events coming up in the next few months, it’s obvious that support for social business is growing here, so hopefully the scene is here to stay.