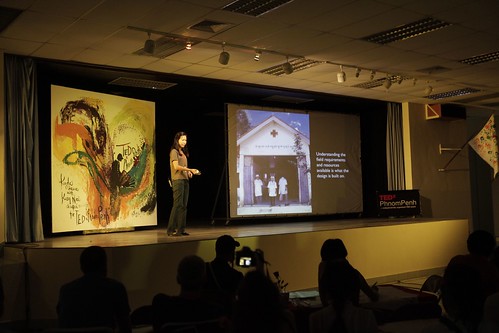 If things have seemed a bit silent over here at the Kinyei site this is because the team has been busy helping organise Cambodia’s first TEDx conference! Over 150 people attended, with many more viewing via a live web feed as some of Cambodia’s most inspiring speakers presented on the theme “building the future.”

A representative team from Kinyei attended including Phalla, Untac, and Alex. Speaking for all the attendees, Phalla felt positively “motivated to make changes in society” after the conference. It’s hard not to agree after watching the talks, which are all available online here.

The team were particularly impressed by ex-ad-man Mike Rios, who urged people to ask not “how to make money,” but “how to make meaning.” Mike’s energetic style raised plenty of laughs from the audience and his theme of changing cultural values was carried further by Kounila Keo, who described how young Cambodians were finding unprecedented freedom of expression and escape from social restrictions through blogging.

Besides a change in values, many speakers suggested changes in Cambodians’ education. Sithen Sum urged people to take their education into their own hands, while Phloeun Prim reflected upon the importance of cultural and artistic education to a rebuilding nation.

In the context of Phloeun’s talk, the music, dance, and live visual art performances throughout the day, including live painting and chapei performance by Keeda Oikawa and Kong Nai, hip hop dancing by Tiny Toones, and traditional smot chanting by master Keot Ran and student Srey Peu showed the way forward for the “transformation of the nation through the arts.”

The event was received very positively, with Tharum Bun claiming that the line-up “collectively represent[ed] some of the brightest observers of modern day Cambodia,” and Thomas Wanhoff praising the day for being not just “rational,” but “emotional.” Blogger and social business entrepeneur Leigh saw the event as “an incredible blend of thoughts and cultures.” Congratulations to all involved!